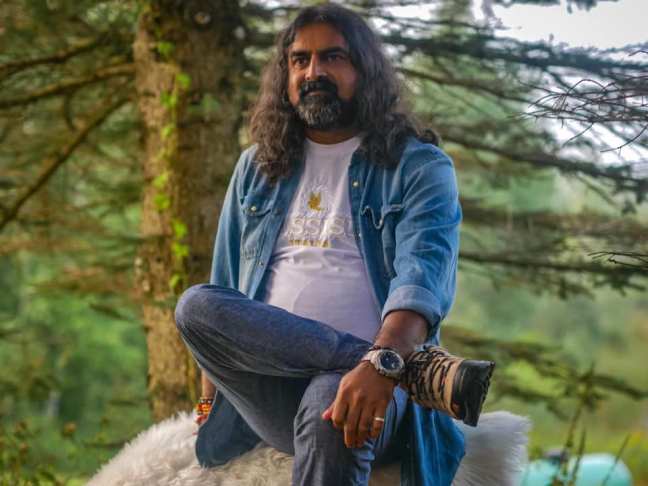 In this beautiful thought provoking testimonial, Charles Londi talks about his encounter with Mohanji through a vision 28 years ago. Now, many years later, he recognises the importance of connecting with the consciousness of Mohanji to understand his different dimensions.

The figure floated on the ethers near the ceiling, scintillating with light. It was as if I was seeing or watching this strange apparition with my naked eyes. That was in the summer of 1992.

The events that ran up to the aforementioned were uncalculated, unplanned, and followed a tortuous route. I had wanted to seek closeness with God, The ALL IS, The True Reality, or the Supreme Consciousness, and hide under its wings from the vicissitudes of life that were buffeting me like an evil storm. So I joined Ma Cecile’s charismatic prayer group even though not a Catholic at all. She was a devout Catholic, very prayerful, kind-hearted, and simple, but was hated by the local parish priest who termed her an emissary of the devil probably because her devoutness, purity, truthfulness, and dedication attracted so many people to her prayer group that produced many miracles that were the talk of the day in the small town where I worked as a very young teacher.

I wanted to be like Ma Cecile and always wiggled myself near her in hopes to be touched by the power of the Holy Spirit (Master Power) that descended on her at each prayer session and had her shaking violently like a leaf in a typhoon. I accompanied Ma Cecile once for a 3-4 days retreat to holy grounds where Mary, Mother of Jesus, was said to have appeared. We swam in the muddy and slimy waters of the swamp on the holy ground, ate the mud there that was believed to relieve one of all afflictions, and we were expected to walk on knees with a heavy cross to the top of a hill that had an effigy of Jesus nailed on the cross. What self-mortification! What excruciating pain with bruises all over! Many people gave up halfway as it was not easy to reach the top of the hill that had a cross with Jesus’s effigy nailed to it. I did not make it too.

Ma Cecile made it to the top of the hill with a heavy wooden cross each time she came for the retreat as attested by everyone who knew her. This particular retreat was to be crowned with a 9-day novena in honour of Archangel St. Michael after each person had returned to their homes. No meat was to be eaten in the interval, and everyone was to maintain inner and outer purity in all affairs while devoutly reciting a special prayer to St. Michael on each of the nine days making a total of nine different prayers. I lived in the same town as Ma Cecile, so had the additional advantage of drinking only ‘holy water’ blessed by her during general evening prayer sessions. Then each individual returned home to do his special prayer to St. Michael for the day at the hour he/she had fixed. I went through my 9-day novena hitch-free, ending my prayers to Archangel Michael before midnight on the 9th day. After that, I did other prayers and read a little till about 1:30 am. Then I went to bed, but it was not easy falling asleep. In the twilight zone between wakefulness and sleep, when one is still very conscious, something abnormal happened.

Yes, I had prayed to St. Michael for nine days for help and protection in my life, but I did not harbour the thought of a visitation by him. I just had the inner conviction that I had done my part, and it was left to St. Michael to complete it.

”Hey, who is this being enveloped by bright light hovering in my bedroom?”, I asked myself. ”Is this St. Michael, and if so why isn’t he a Whiteman as shown in photos. And where are his giant wings and long spear used to pierce the devil?”, I mused. The being floating up there was dark in complexion, had long black flowing curly hair, a black beard, and a black moustache that stood in sharp contrast to the images painted of Archangel St. Michael. Then the being started gliding towards my bed. I wasn’t frightened, but I developed goose pimples from head to toe as he floated and sat on the bed sill. He asked me, ”Do you believe you can be saved?” I answered, ”Yes, by the grace of God.” Then he asked again, ”Where do you feel pain?” I was dumbfounded and for want of something to say, so I just pointed at my thigh saying, ”Here.” The magnificent being then used his hand and struck me on the thigh three times and vanished.

I had forgotten about my vision with the ethereal being upon meeting Brahmarishi Mohanji, but some time ago, upon looking at his photo and contemplating it, it suddenly burst upon me, like sunshine from behind the dark clouds, that this is the being who had appeared to me 28 years ago and struck my thigh three times and disappeared. I think when the time is propitious, the meeting between a Master and his student is inevitable in any lifetime, and a span of even 50 years before the meeting is just a moment.

He has all the features of that night visitor that I have not been able to associate with all the other Masters I have come across. Worthy of note is that he is a Living Master in the flesh, and has taken on the onerous task of gathering his students/children, breaking their patterns and bindings that have glued them to the deceptive matrix of Maya in creation for eons, and taking them back into the resplendent light of the self-subsisting Supreme Absolute, THE ALL THAT EVER IS. Thanks for seeking me out, thanks for the connection.

The dimensions of Mohanji

We hear talk of phases of the moon, and will it be strange or foolish to use the word ‘phase(s)’ in relation to humans? Not at all, when you are dealing with an enigmatic personality like Mohanji in my opinion. He is visible and invisible, palpable and impalpable, outer and inner, and he advises people to connect with his Consciousness and not with his body. This is an indication that there is more to him spiritually than his body that is seen and felt. And above all he says, ”I AM ALWAYS WITH YOU.” How strange when he cannot walk down the road with us, one-dimensional conscious individuals would say. I have a friend who needs his phone number at all cost to be sure he can really make contact with him.

However, it is my wild guess that when Mohanji says, ”I AM ALWAYS WITH YOU”, it presupposes that we should not even need him as he is ever-present as the air we breathe–and where there is a need, there is a lack of something. Could Mohanji be saying that WHAT IS IS, and there is no space to be filled as there is no emptiness? He even says it loud and clear that the need for the Master is binding in itself. These statements and considerations lead to the conclusion that there is more than one side to the person millions of people look up to. Understanding the multifarious dimensions of this magnanimous individual will determine the reality of each person who looks up to him for spiritual guidance. Let us first look at the outer physical aspect of Mohanji–the talking, walking, eating, and breathing man. This estimation is within the confines of his role as a spiritual leader and has nothing to do with his day-to-day personal life which shouldn’t be my concern or that of anyone else.

How nice it will be to have Mohanji as a personal friend, have his phone number, walk, talk, and eat with him daily! This is one aspect of Mohanji that some people will most love and which in their valuation, will guarantee that they have the presence of the Master in their lives. How great, but can everyone have that privilege, and can this be extended to everyone on the planet? Let’s look at what can compromise this desire for closeness with Mohanji had he the time and energy to personally befriend everyone intimately.

Everyone is limited by geography, and various other financial and situational constraints, along with the current restrictions due to Covid-19. Wow! If meeting Mohanji physically and personally were the only way to be certain of his presence in our lives, then it will be a herculean task. And some people may ask, ”Is it worth all the trouble at all?” It should, however, be noted that people have sacrificed all material and financial resources and faced all sorts of difficulties just to meet a Master they bond with as their lives will be meaningless without such a meeting. Notwithstanding, there is another aspect of Mohanji, which is more important than actually meeting him in person. Meet the other dimension of Mohanji that is known by mostly esoteric students and which should be central to the understanding of spiritual devotees.

This aspect of Mohanji can be termed the Inner Master. One needn’t get out the door to be in contact with this aspect because it is an ISNESS, a Principle; ever there and ever now, closer than one’s own breath, floating on the invisible vibrating ether. In fact, it would seem that each step towards this aspect of the Master is a step away from it. This elusive dimension of Mohanji requires only faith, dedication, commitment, perception, and recognition of it for what it is to make it a reality in one’s life. One may never have the opportunity and means to see the other dimension of Mohanji without hassles. Could it be that one may clutch the outer Mohanji and be light-years away from the boundless, timeless, and limitless Eternal Principle that is subject to no physical man-made laws, is a law unto itself and is omnipotent, omnipresent, and omniscient at each moment? And no matter the thousands of kilometres that separate them, the inner Master can be with his devotee at all moments through the inner channels even if the devotee is ignorant of the fact.

This write-up doesn’t seek to undermine the importance of the physical aspect of Mohanji or of meeting it. He operates in the Supreme Consciousness at all times in all dimensions of himself, but as Consciousness is the only state worth consideration, so the inner Consciousness is amplified. It is at all times national, international, universal, inter-universal, planetary, and interplanetary, galactic and intergalactic. As a spiritual student, one knows better than to cling to the outer aspect of Mohanji and he reminds everyone at all times about this. This constant reminder precludes the possibility of frantic worship of the personality that most humans are prone to.

The views, opinions, and positions expressed by the authors and those providing comments on these blogs are theirs alone and do not necessarily reflect the views, opinions or positions of Mohanji, Mohanji Foundation, it’s members, employees or any other individual or entity associated with Mohanji or Mohanji Foundation. We make no representations as to accuracy, completeness, timeliness, suitability or validity of any information presented by individual authors and/or commenters on our blogs and will not be liable for any errors, omissions, or delays in this information or any losses, injuries or damages arising from its display or use.

We reserve the right to delete, edit, or alter in any manner we see fit blog entries or comments that we, in our sole discretion, deem to be obscene, offensive, defamatory, threatening, in violation of trademark, copyright or other laws, of an express commercial nature, or otherwise unacceptable.